1. THE CHETNIKS BEFORE THE SECOND WORLD WAR

The Chetniks before the Second World War

The word četnik/четник denotes a member of a četa/чета, i.e. a small armed formation. The term came into use in Serbia under Ottoman rule, as a designation for various bands of outlaws who engaged in četovanje/четовање, i.e. guerrilla acts in opposition to the repressive policies of local Turkish strongmen. Alongside četnik/четник and četovanje/четовање, the terms hajduk/хајдук and hajdučija/хајдучија were also commonly used with the same meanings. At the beginning of the 20th century, Chetnik guerrilla bands were formed in what is now North Macedonia, organised, equipped, and financed for the most part by the neighbouring Kingdom of Serbia. Their aim was to liberate Macedonia from Ottoman rule and then unite it with Serbia. Chetnik forces, under the command of the Serbian army, played an important role in the Balkan Wars and then in the First World War as well. Following the formation of the Kingdom of Serbs, Croats, and Slovenes, that is, Yugoslavia, Chetnik veterans in Belgrade founded the “Association of Chetniks for Freedom and Honour of the Fatherland” (Удружење четника за слободу и част Отаџбине / Udruženje četnika za slobodu i čast Otadžbine) as a leading Serbian patriotic group. In 1925 the Association was renamed “Petar Mrkonjić Association of Serbian Chetniks for the King and Fatherland” (Удружење српских четника „Петар Мркоњић“ за Краља и Отаџбину / Udruženje srpskih četnika „Petar Mrkonjić“ za Kralja i Otadžbinu) and brought under the control of the Radical Party. This association was chaired by Puniša Račić (Пуниша Рачић), the man who in 1927 shot and killed several Croatian Peasant Party representatives in the parliament in Belgrade. The best-known leaders of Chetnik organisations during the 1930s were Ilija Trifunović Birčanin (Илија Трифуновић Бирчанин) and Kosta Milovanović Pećanac (Коста Миловановић Пећанац). The Chetnik associations in the Kingdom of Yugoslavia were known for their anti-democratic, anti-communist, and anti-liberal views, while their ideology was Serbian nationalism. In April 1940 the Yugoslav government established a Chetnik Command, charged with commanding the Chetnik battalions of the Royal Yugoslav Army as its auxiliary units. Following the invasion of Yugoslavia and the brief war of April 1941, the Yugoslav Army and its Chetnik Command surrendered to the Germans. 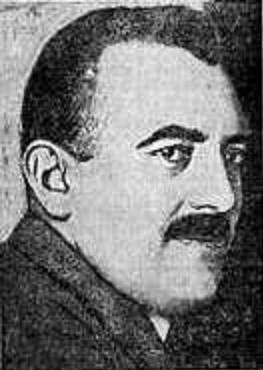