The negotiations concerning the surrender of the Croatian Armed Forces (the NDH military) took place on 14–15 May 1945 in the castle of Count Thurn-Valsassina on a small hill overlooking the town of Bleiburg. The negotiations involved representatives of the British forces (Brigadier-General Patrick T. D. Scott), the Yugoslav Army (lieutenant colonel Milan Basta and lieutenant colonel Ivan Kovačić Efenka), and the Croatian Armed Forces (generals Ivo Herenčić, Vjekoslav Servatzy, Vladimir Metikoš, and colonel Danijel Crljen). As it turned out, the main issue in the negotiations was whether the soldiers and civilians who had left the NDH would surrender to the British or to the Yugoslav army.

After conducting military and political consultations, the British refused to accept the refugees, thereby making them prisoners of the Yugoslav Army. Their acting was motivated by several reasons. On the one hand, even though no decision reached at the Yalta Conference obliged them to do so, there was nevertheless an unwritten rule in principle that all prisoners of war should be returned to their country of citizenship. At the same time, the British regarded the Yugoslav army as an ally and did not wish to jeopardise this relationship by giving rise to speculations that they might turn on the Yugoslav communists with former members of enemy formations such as Ustaše, Chetniks, and the Croatian and Slovenian Home Guard. Finally, their decision was likewise affected by uncertainties regarding the future of Carinthia (German: Kärnten; Slovene: Koroška). The British calculated that taking up a large number of these prisoners might jeopardise their efforts to maintain control over this region in southern Austria, faced with the advancing Yugoslav forces. 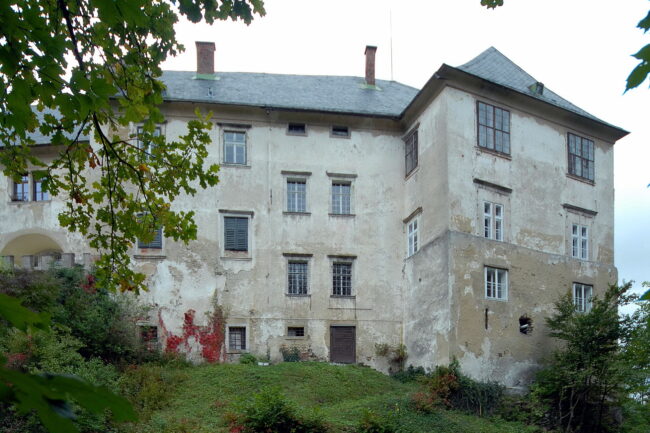 The Castle of Count Thurn-Valsassina, Bleiburg

The representatives of the Yugoslav Army presented their NDH counterparts with an ultimatum demanding that they surrender within one hour upon returning to the army assembled in the field surrounding the town, indicating their compliance by flying white flags. Shortly thereafter the Chetnik forces from Montenegro likewise surrendered to the Yugoslav commanders. This marked the official end of the Second World War in the Yugoslav theatre, on 15 May 1945, between four and four-thirty in the afternoon. 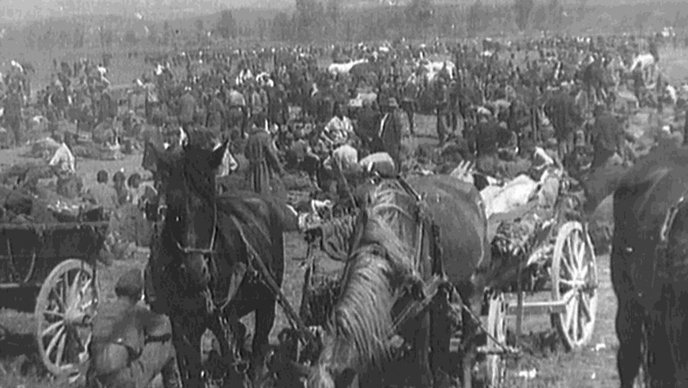 Soldiers and civilians in the Bleiburg Field, 14 May 1945

The vast majority of the refugees agreed to a peaceful surrender, while some of them tried to escape by fleeing into the woods surrounding the field at Bleiburg. Yugoslav Army Troops began shooting at those who failed to display white flags by the deadline set out in the ultimatum, killing several dozen people.