THE CHARACTER OF THE CAMP

The vast majority of the prisoners were held in the camp not because a court had found them guilty of a criminal offence, but because the government of the NDH had proclaimed their affiliation with a certain ethnic or religious group a sufficient and justifiable reason for imprisonment.

The Ustaše camp at Jasenovac was a multipurpose camp, which means that it was a concentration camp, because people who, for various reasons, had been proclaimed unsuitable or undesirable were brought there from across the territory controlled by the state; a transit camp, because for many prisoners it was only the first stop before being sent to forced labour in the Third Reich or one its death camps (e.g. Auschwitz); a penal camp, because it also held persons whom the courts had found guilty of a criminal offence; and a prisoner-of-war camp, because it also housed prisoners of war, such as Partisan or Chetnik (četnik/четник) fighters. Also, Jasenovac was a labour camp, but the kind of slave labour that was imposed on its prisoners was incomparable to the type of work that convicts are usually obliged to perform whilst serving their prison sentence.

Although the inmates of Jasenovac performed a wide range of activities in agriculture, construction, and crafts, the purpose of their work was not community service, but primarily exhaustion through work. The harsh conditions of work at the camp were exacerbated by the brutality of the guards, including various kinds of punishments, from beatings to murder. In addition to hard work, the inmates’ lives were made even harder by constant hunger as well, inhumane sanitary and health conditions, and various infectious diseases, which claimed the lives of many prisoners. An important intent behind the establishment of the Jasenovac camp was killing and therefore the camp may also be described as a death camp. In addition to the Ustaše army’s punitive expeditions undertaken in various parts of the NDH, which ended in mass killings on the spot, the camp at Jasenovac played the main role in the project of ethnic cleansing in Croatia, that is, the genocide of the Serb, Roma, and Jewish people.

There were individual and mass killings, by shooting and slaying, hanging, gassing, bludgeoning, starvation, etc. The bodies of the victims were burnt, thrown into the river Sava, or buried in mass graves in the vicinity of the camp itself. Often, the bodies of the victims were buried immediately upon their execution, on the same spot; for instance, this was done at the mass graves at Gradina on the right bank of the Sava, opposite Jasenovac.

THE NUMBER OF VICTIMS

The exact number of people murdered at the Ustaše camp at Jasenovac is difficult and, with the passage of time, almost impossible to uncover. Due to the lack of reliable documentation, unexamined or inaccessible burial and execution sites, as well as the treatment of the victims’ bodies (e.g. disposal in the river Sava or burning in “Piccili’s oven”), when it comes to numbers, they are typically estimates. In his trial after the war, Ljubo Miloš, one of the camp’s commanders, testified that “Luburić had determined that the number of prisoners at Jasenovac should always remain around 3,000 because that number for the most part sufficed in terms of meeting the needs of the labour service” and further noted that “there were times when there were as many as 5,000 prisoners in the camp, but such a number could not go on for very long, because in such cases the excess was subject to elimination”. The impossibility of determining the precise number of prisoners, as well as the implication that the camp’s capacity was enhanced by eliminating inmates are further suggested by a memo from the Main Headquarters of the Poglavnik of 27 April 1942, which states, among other things, that “the concentration and labour camp in Jasenovac can accommodate an unlimited number of prisoners”.

So far, all estimates of the number of people murdered at Jasenovac have been based, at best, on demographic and statistic research or lists of victims identified by name, but many of them are also the result of merely arbitrary and manipulative calculations. The key moment that prevented, in the long run, a scientific approach to this topic occurred immediately after the end of World War II. In 1946, the Federal People’s Republic of Yugoslavia (FPRY) officially reported to the International Commission for Reparations in Paris an exaggerated number citing a total of 1,706,000 human casualties in the war. Given that human losses factored in the calculation of reparations, the reasons behind this exaggeration become clearer. Since then, without any evidence whatsoever, official accounts have cited figures as high as 500,000, 600,000, and, more recently, even 700,000 victims at the Jasenovac camp alone. For decades, that number remained unrevised, even though later studies reduced the total number of casualties in Yugoslavia as a whole down to around one million. Eventually, the number of victims at Jasenovac became one of the main sources of contention between Serb and Croat nationalists. While the former have groundlessly sought to exaggerate it, the latter have sought to minimise it, likewise with no basis in truth.

A victim’s remains at the camp in Jasenovac

Among more serious estimates, one should emphasise the demographic-statistic studies conducted by Vladimir Žerjavić and Bogoljub Kočović in the late 1980s and early 1990s. According to Žerjavić’s calculations, between 80,000 and 90,000 people perished at Jasenovac, while according to Kočović, the total number of ethnic Serb victims in all camps controlled by the NDH was between 150,000 and 200,000. Beginning in the 1990s, the Museum of Genocide Victims in Belgrade has published its list of the victims of Jasenovac, updating it from time to time. According to the latest data, the list includes just under 85,000 names, which is not regarded as the final tally, with the Museum’s experts estimating that the total number of people murdered at Jasenovac might be between 120,000 and 130,000.

The concentration camp at Jasenovac existed for just over 1,330 days, from August 1941 until April 1945. Neither before nor after was there ever a prison camp or penitentiary at that site. The only exception is Stara Gradiška, some 40 kilometres (25 miles) away, where there was a prison facility even in Austro-Hungarian times, which became part of the Jasenovac prison camp complex during World War II, reverting after the war to its old use as a prison.

The ruins of the inmates’ barracks, 1945

Right before the end of World War II, the Ustaše embarked on a systematic effort to remove all evidence of the existence of a prison camp at Jasenovac, seeking to destroy not only the corpses, but also the infrastructure. Some of the camp’s facilities, including the inmates’ accommodation, were torched, while others were blown up. During their retreat, the Ustaše also demolished most of the houses in the village of Jasenovac itself. That was precisely the reason why the new communist authorities allowed the villagers of Jasenovac to rebuild their houses with construction materials obtained from the ruins of the camp. No written, visual, oral, or any other kind of sources have been found that might suggest that the new communist authorities used the same spot after 1945 to establish a camp for the mass killing of their political enemies. Various groups of prisoners of war, including German soldiers, members of the NDH armed forces, Chetniks, and the Slovenian White Guard, were dispatched from newly established prisoner-of-war camps to forced labour in Jasenovac, which at first amounted to clearing up the ruins there and later also included the reconstruction of rail lines, bridges, and the like. One of the biggest prisoner-of-war camps was established at Sisak in summer 1945, under the official name of “Sisak Forced Labour Facility” (Zavod za prisilni rad Sisak). The prisoners of war who were held there and brought to work in Jasenovac were called the “Jasenovac Work Group” (Radna grupa Jasenovac). None of these activities went on after 1948, when there were no longer any prisoners engaged in forced labour in the area. This type of labour was not meant to work the prisoners to death, but to serve the community, and upon the completion of their sentence, the prisoners were allowed to go home. 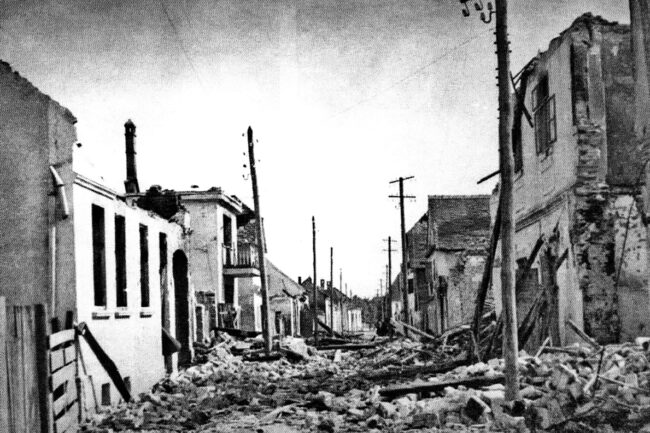 Witness accounts mention individual eliminations or killings of smaller groups of prisoners of war in the immediate vicinity of the former camp at Jasenovac, but such instances included either those who took part in the so-called Ways of the Cross (Križni putevi) or returnees from Bleiburg, or reprisals against captured members of the armed forces of the NDH.